Preparing for the arrival of a baby

A deep freeze as a symptom

In terms of nesting urges, I have been pretty well spared. There was only one item I wanted and needed to work on. That was bringing a large freezer into the house to prepare homemade meals until our daughter arrived. I adore cooking, and it would hurt my heart a lot if I couldn’t serve home-cooked meals during the maternity period. I like knowing exactly what will be on the table.

It also just gives you a lot of peace of mind when you don’t have to worry about your food anymore.

You can find a lot of freezer inspiration on Youtube. My favorite YouTuber is Becky from Acre Homestead. The dishes she prepares aren’t the ones I would make myself, although I’m thinking of testing them one day. The idea of saving a lot of time enticed me the most. Becky is really a fine YouTube star who is enthusiastic in the kitchen and takes you through the story of preparing meals and putting together a pantry of ingredients.

There are other YouTubers who also prepare frozen meals, such as Six Sisters’ Stuff and if you search a bit, you will find more.

You can find piles of inspiration on Pinterest. That’s where I found the marinades for the chicken breasts and how to prepare chicken pot pie to freeze. In general, you can find a lot of recipes on Pinterest, which you definitely can also consider stockpiling in the freezer.

What did we freeze?

The meals I prepared in advance were a selection of our favorite dishes. There’s no point in cooking something you won’t eat anyway. Among them were some delicious winners for me and my husband. Below is a list. The recipes follow.

After a few weeks, we added these recipes:

We also bought several bags of frozen mashed potatoes, stoemp, rösti, fries, pizza dough, and puff pastry. In anticipation of giving birth, I occasionally baked cakes and cookies and froze the leftover pieces. This is perfect for a quick and delicious dessert! We have twix cookies and a few pieces of banana cake with caramel frosting.

To fill an entire freezer, it’s best to proceed systematically. Otherwise, it will be interminable. After my list of dishes was on point, I started cooking a few weekends in a row. On Saturday mornings, I went to the market at the Anderlecht abattoir to buy meat, while my friend did the shopping for the other ingredients. We usually do our meat purchases at the butcher Meat The World. They have a large selection of fresh meat as well as a large charcuterie department. Buying our meat in larger quantities and at the market made it a little cheaper than if we would have gotten everything at the supermarket. On top of that, we were spared from impulse purchases.

On Sundays, Mondays, and sometimes Tuesdays I was cooking. The crockpot was ideal for some dishes. I just had to dump everything in and turn it on for several hours until the dish was done. Other recipes required a little more effort.

Since giving birth, we have been steadily emptying the freezer. But when I have the energy to prepare fresh meals again, I will make double portions regularly to replenish the stock.

The choice of freezer was mainly determined by where we wanted to put it. Initially, we wanted to install it in the basement and since the basement ceiling is relatively low, we couldn’t purchase a tall freezer. Pretty soon I was looking into chest freezers, a bit like the one in the stores, but without a glass lid. We bought an AEG chest freezer.

For the setup in the basement, unfortunately, there was a problem. We don’t have electricity there and it would have to be installed first. Pretty last minute I tried to get it fixed and it was very complicated. The best option was to make a hole through the ceiling of the basement and then go through the hallway to the bathroom, run the cable along the ceiling, and then through the wall to a new fuse in the electrical box. We would have to have an electrician do the last stage. You see: complicated.

In the end, we decided to put the freezer on the “inside porch.” It takes up a lot of space, but that way it’s super accessible and we don’t have to go to the basement every time. When we move to our new house, we will have enough space to put the freezer anyway.

Unfortunately, a freezerchest has the disadvantage of being harder to keep track of your stuff. An inventory is a must, but I haven’t made one. After a few weeks, it’s hard to know what’s left unless you have a flawless memory. Soon I would like to put a system in the chest by using trays and putting similar dishes together. Anyway, it is advisable to freeze bags flat. That way you can thaw them more easily and you can store them better. For example, you can put them next to each other vertically so you don’t have to move a bunch of bags every time you need the bottom one.

Is a building a frozen food stock recommended?

Yes, it is absolutely recommended. I find it an incredible relief not to have to cook. My boyfriend could do it, but he doesn’t have the habit and it would probably bother me if he used the kitchen in a way that I don’t like that much. We each have our strengths and cooking is mine.

We are now just six weeks after the birth of our daughter and it is unbelievable how little time there is to spend with anything but her. Nor would I want to. There is nothing more delightful than watching her while she is sleeping or when she is drinking or looking at her daddy or me with her big eyes.

0 comments on “The freezer story” 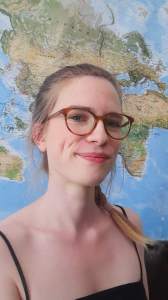